Couplings are divided into categories: Rigid and Flexible. As compared with flexible couplings, rigid couplings have limited application. Rigid couplings do not have the ability to compensate for shaft misalignments and are therefore used where shafts are already positioned in precise lateral and angular alignment. Any misalignment between shafts will create high stresses and support bearing loads.

Rigid couplings by virtue of their simple rugged design are generally able to transmit more power than flexible couplings of comparable size but this is not an Important advantage except in high horsepower applications.

This section will be devoted to the small to medium size flexible type couplings which cover a much larger field of applications. Flexible shafts, which are closely related to flexible couplings will also be discussed. This writeup is divided into the following categories.


Flexible couplings are designed to accommodate various types of load conditions. No one type of coupling can provide the universal solution to all coupling problems;hence many designs are available, each possessing construction features to accommodate one or more types of application requirements. Successful coupling selection requires a clear understanding of application conditions. The major factors governing coupling selection are:

(a) Torque and Horsepower

The strength of a coupling is defined as its ability to transmit a required torque load, frequently in combination with other factors. Hence a coupling may be selected whose rated torque capacity is many times greater than needed. For example, in a Coupling subject to wear and increasing backlash, a useful torque rating would depend chiefly on backlash limitations rather than strength. For manually operated drives, the torque Imposed through Improper handling may be In excess of the drive torque required. Couplings are frequently specified In horsepower capacity at various speeds. Horsepower is a function of torque and speed, and it can be readily determined from the formula below in Figure 4. 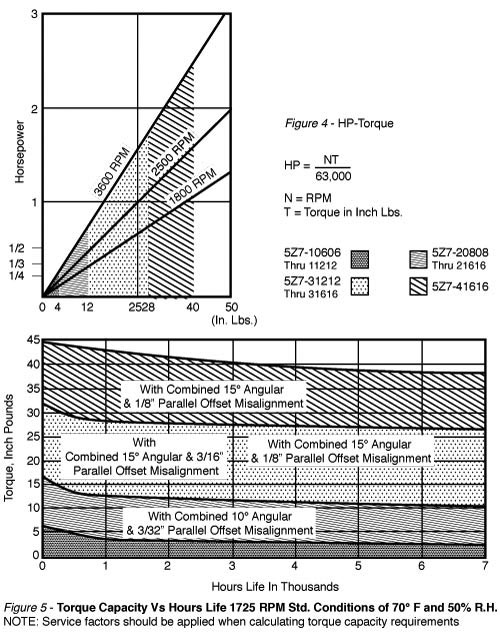 Shaft misalignment can be due to unavoidable tolerance build-ups in a mechanism or intentionally produced to fulfill a specific function. Figure 1 illustrates the various types of shaft misalignments often encountered.

Lateral and axial flexibility of couplings are factors frequently overlooked. The term flexible does not mean that the Coupling gives Complete freedom of movement to coupled shafts with no transmissible force. More properly, flexible couplings give limited freedom of movement with transmitted force. Simply stated: Forces are needed to make a flexible coupling flex. These forces are either lateral (at right angles to the shafts) or axial in nature or a combination of both. Lateral forces may produce a bending moment on the shafts and a radial toad on the support bearings. Axial force can produce undesirable thrust loads if not considered in the original design. Universal joints and Oldham couplings impose relatively little lateral load on bearings. The elastomeric type of couplings will produce lateral forces in proportion to their stiffness. Small lateral force calls for soft rubber and in turn reduces torque capacity.

Torsional flexibilty of a coupling is the elastic deformation induced in a flexible coupling while transmitting torque. In some applications using encoders, it may be essential that the torsional flexibility sometimes be very low so as not to introduce reading errors caused by angular displacements. On the other hand torsional deflection may be desirable for reducing peak torque In driving high inertia loads.

Backlash is the amount of rotational play inherent in flexible couplings which utilize moving parts. In some applications this "slack" may not be objectionable, but In an application such as described In the previous paragraph backlash would rule out couplings of this type.

In addition to the types of error already described, universal joints produce an error because of their kinematic behavior. If the input speed Into a single universal joint is held constant, then the output will produce cyclic fluctuations in direct relation to the operating angles of the input and output shafts. This Will be described more fully in the section dealing with Universal Joints.

Service conditions encompass factors such as temperature, operating medium, lubrication, accessibility for maintenance and should be reviewed before a final selection is made.